To appreciate art you can go to a gallery, museum, or... simply go out to the street. It is not different in Lublin. We present 21 murals, located in the city centre. Wear comfortable shoes or choose a bike, it's a few kilometers to go. It will be worth it!

1. Let's start with the Old Town. One of the most famous views of Lublin comes from Braun and Hogenberg's work called "Civitates orbis terrarum", published in 1618 in Cologne. The view presents the city during its "golden age", namely at the turn of XVI and XVII century. A mural presenting aforementioned view was created in 2015 in the backyard of Jezuicka 1, just by the Cracow Gate. It was made by Marcin Proczek, Faculty of Arts student at the Maria Curie Skłodowska University. 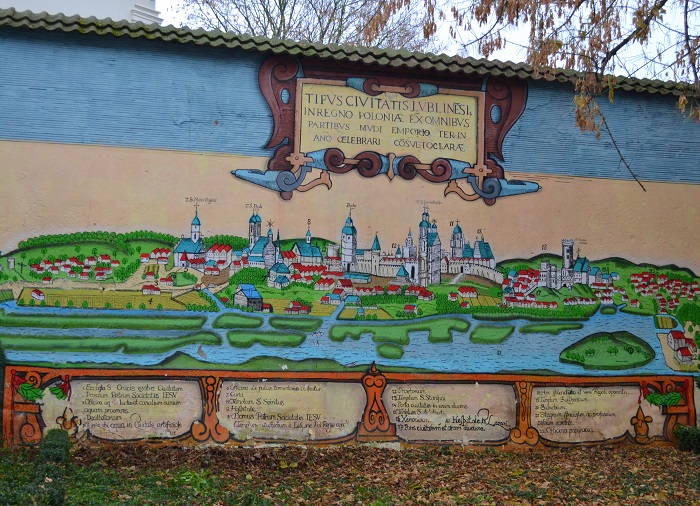 2. The mural realized along Czechówka river, just by the Vivo shopping mall (Unii Lubelskiej avenue), commemorates the jewish district. It's a black and white collage made of the photographs taken by Stefan Kiełsznia in the 1930's, on Nowa, Lubartowska, and Kowalska streets. We can see old houses with the signboards in Polish and Jidysz, as well as people walking through the streets. The mural was created by the "Grodzka Gate - NN Theatre" Centre. 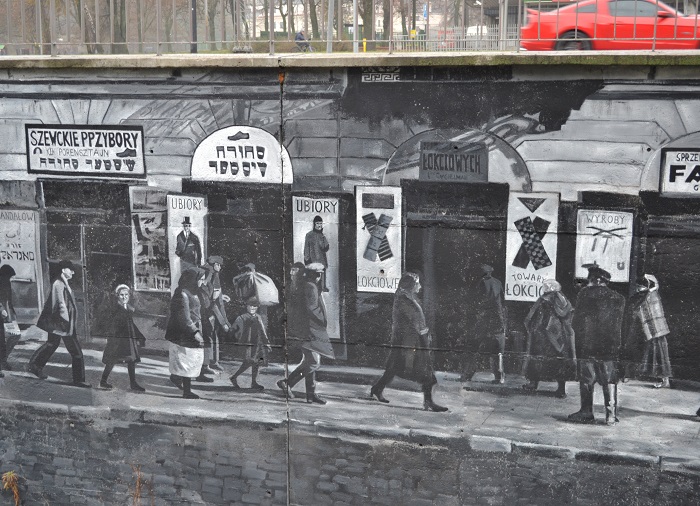 3. On the wall of the Stefania Sempołowska's Highschool nr 4 at Szkolna 4 street, a geometric abstraction was created during the Open City Festival in 2015. Its autor is Nawer - Architecture and Urban Planning graduate from Kraków. Thanks to its location on a hill, the mural is clearly visible even from Zamkowy square. 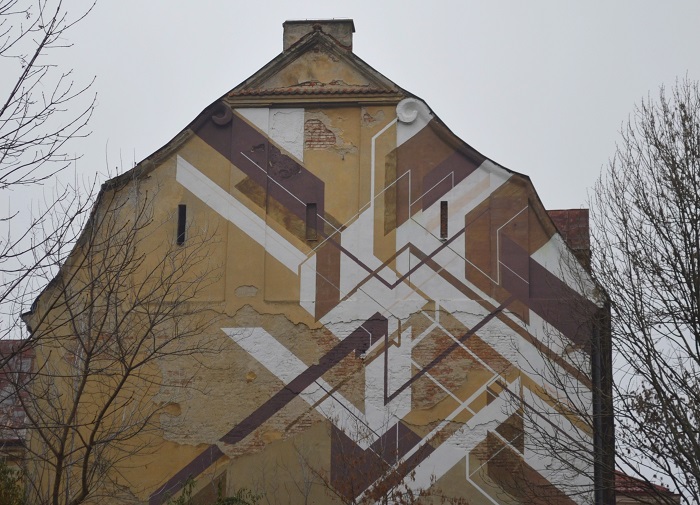 4. On Targowa 5 street there's an intersting mural from 2012 created by The Krasnal team. It presents simplified portraits of grumpy dwarfs and contrasting red writing "Jest super" ("It's cool"). Below there's a writing in English: "Wielki Krasnal was here! And will be back...". The mural was created within a project of the Studio of Socially Engaged Art "The Districts". According to the artistic environment, it can be understood as "a comment about the exaggerated and incomprehensible optimism of the Poles in the face of deteriorating state of the country". It draws attention to sweeping the social problems under the rug. The "Jest super" writing also associates with the song by T.Love band. 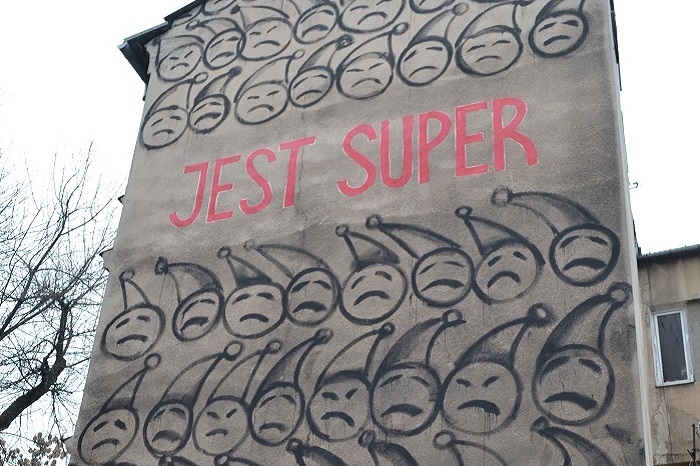 5. Walking through Lubartowska street we can spot a couple of murals. At the junction with Ruska street (Lubartowska 49) there's a quote from the novel by Anna Langfus, referring to the events of 1941, when a ghetto was established in Lublin to divide the Jews from the rest of the citizens. The author of the novel was born and raised nearby, at Lubartowska 24 street.

6. Ukrainian creator Aleksiej Kislow is the author of the mural at Lubartowska 55 street. The work's atmosphere can relate to Alice in Wonderland. It shows a cat with a woman's face, sitting under a mushroom tree. In the background there's a city and a starry sky. However, the meaning is much deeper, and the author himself says about it: „In my work I use symbols. Some of them are used more frequently than the others. One of my favourites is a tree, that has different meainings in different cultures. For me a tree is the axis of the world and the foundation of all things. The city that grows around it reflects Eastern Europe. And the see-through cat symbolizes its spiritual development. The bird and the fruit in the upper branches of the tree is the future and further development.” 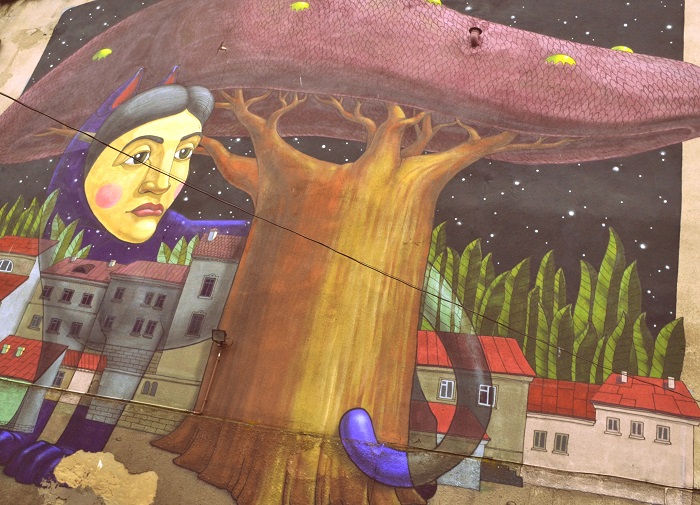 7. A little bit further, at Lubartowska 57 street, we can see a man, a dog, and a bone, all bound with a leash. The mural was created in 2014 during the Lublin Graffiti Festival. Its authors are the graduates of the Fine Arts Academy in Łódź, Przemysław Blejzyk „Sainer” i Mateusz Gapski „Bezt”, known as the Etam Cru duo. 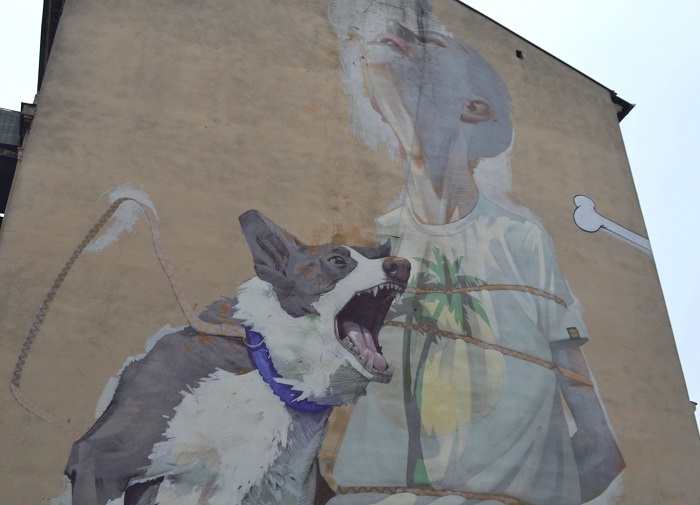 8. On the building at Lubartowska 69 street there's a painting referring to Lublin cider and Lublin Young Cider Festival. The work was created in 2016 on the initiative of Ambra Company and Lublin City Office. Its authors are Magnifiko group and polish illustrator and graphic designer Karol Banach. 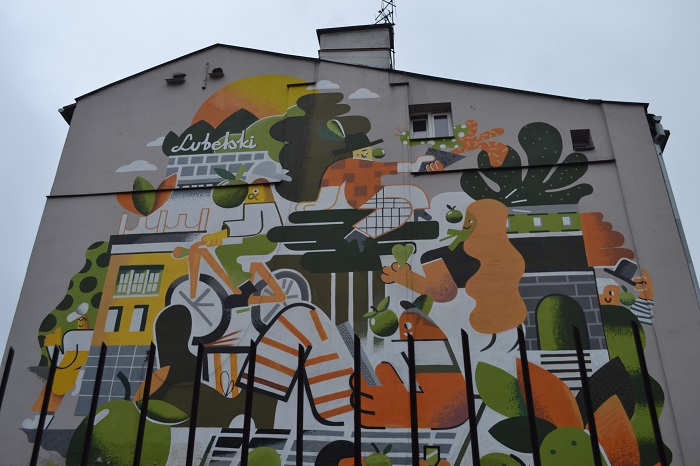 9. On the wall of the building at Lubartowska 70 street a dramatic letter of an anonymous inhabitant of the Lublin ghetto was placed. It was written in in yiddish language in 1942, when the Lublin were being transported to the extermination camp in Bełżec.

10. At the junction of Cyrulicza and Furmańska streets, we can find a mural called "Dreams to the stars", realized by the House of Words - the Chamber of Printing, and Krajobrazy Foundation during the "City of Poetry" Festival in 2017. 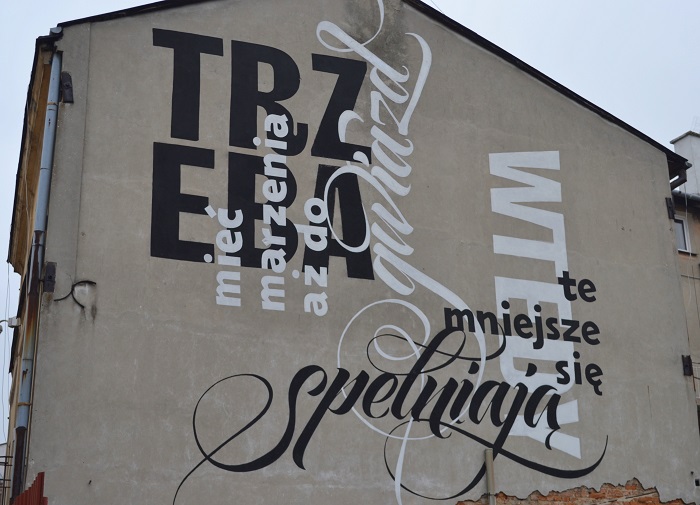 11. Another work located here is known as the "Fish affection". A painters fantasy about a tench is related to the legend about the name of Lublin. Its author is Rafał Eret. 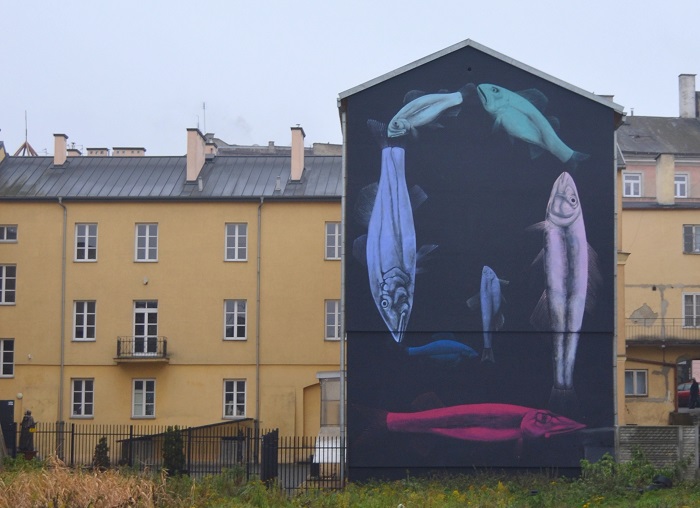 12. A mural located at the wall of the building at Kowalska 3 street is a poem "Colleagues" written by Julia Hartwig. It's one of the most moving of author's poems devoted to the theme of holocaust. The mural is next to a building that used to stand by the entrance to the Lublin ghetto. 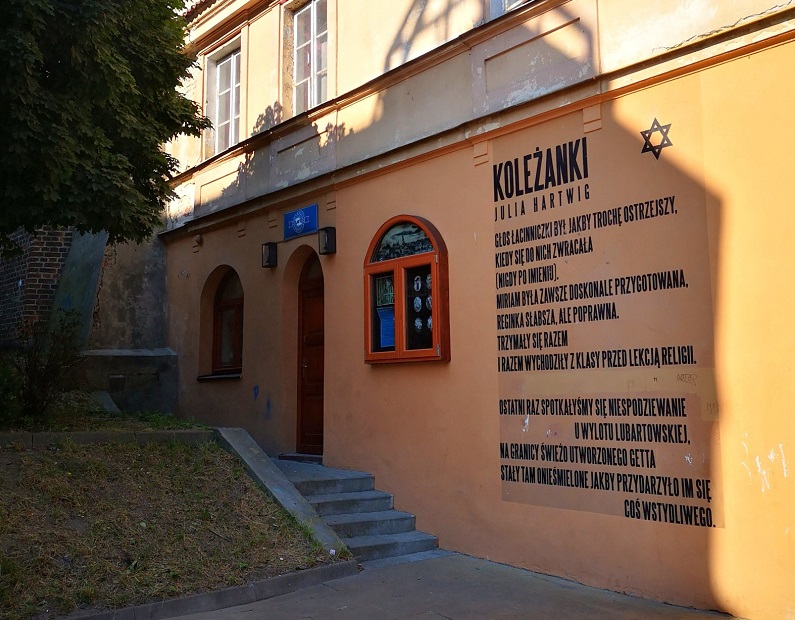 13. A mural devoted to the city transportation vehicles, including trolleybuses, was created at Peowiaków street by french artists Zoer CSX and Velvet Csx. 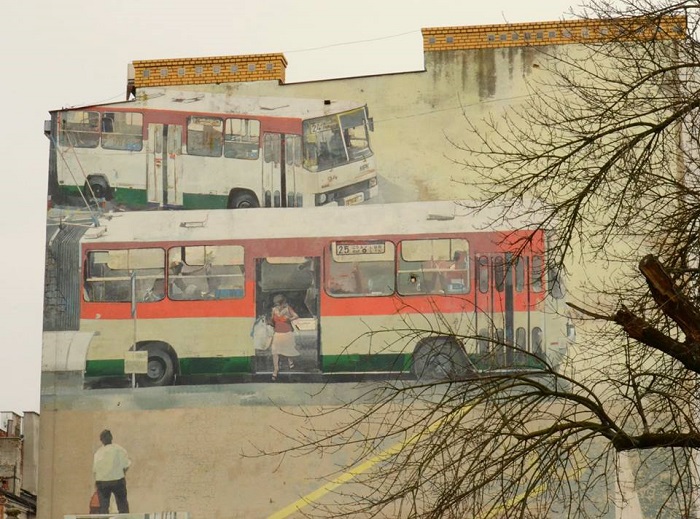 14. The passers-by stop at the sight of the fragment of the "Poem on the City of Lublin" by Józef Czechowicz, painted on the wall at Żmigród 1 street, where The House of Words is located. This famous poet was born, created, and died in Lublin. The mural was created as part of the Lublin Literary Meetings "The City of Poetry". 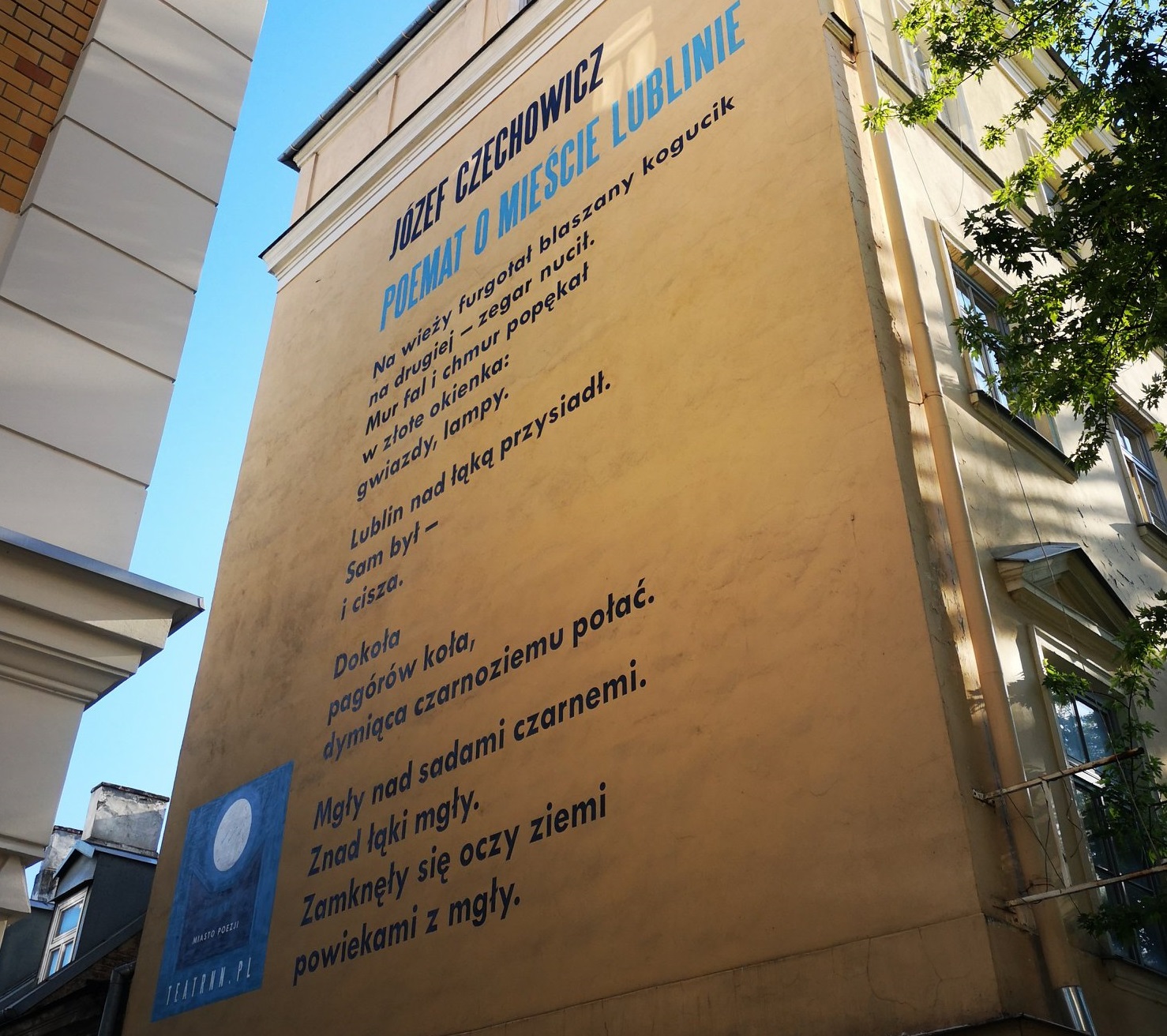 15. On the side wall of the tenement house at ul. Jasna 3, in place of the previous work entitled "Metaphysical Box", another mural was created by Vladimir Manzhosan - a Ukrainian artist known as Waone. The theme of the mural refers to current events in Ukraine. It was created as part of the project "#MakeEuropeBloom: the Time is Now!", which highlights the importance of the conference on the future of Europe, lasting from spring 2021 till spring 2022. 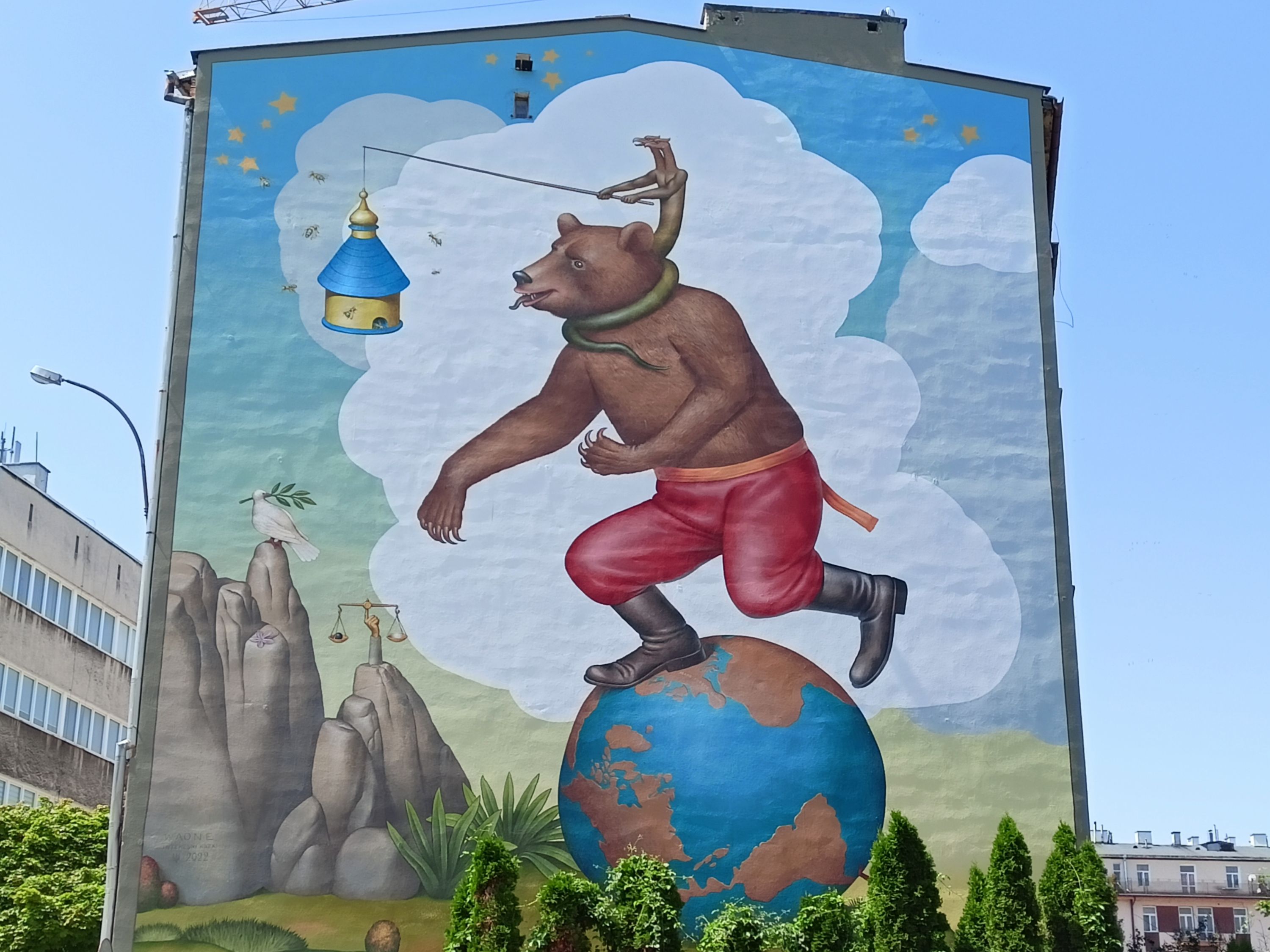 16. The painting "Kto pije i pali ten nie ma robali" ("Who drinks and smokes, has no worms") by Monstfur, at Dolna 3 Maja street, was created thanks to the Studio of Socially Engaged Art "The Districts". 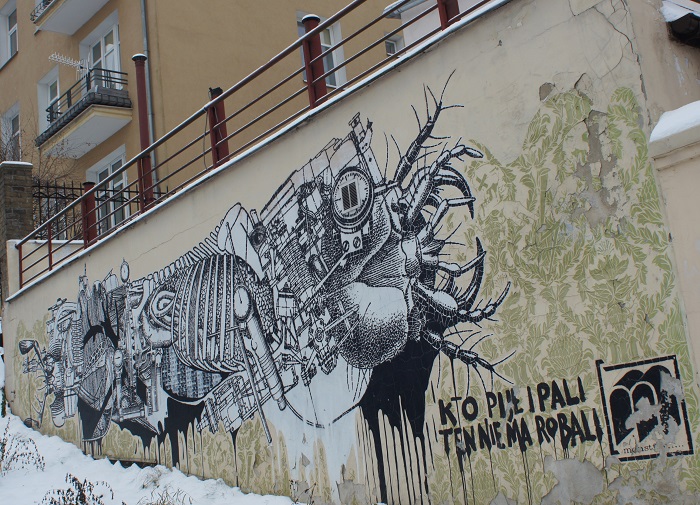 17. The building at the corner of Jasna and Ewangelicka streets was decorated with a transcription of the Polish Song "Gdzie jest ta ulica? Gdzie jest ten dom?” ("Where's this street? Where's this house?") in Jidysz language. It was created in 2011 during the Open City festival. The author is Mariusz Tarkawian. 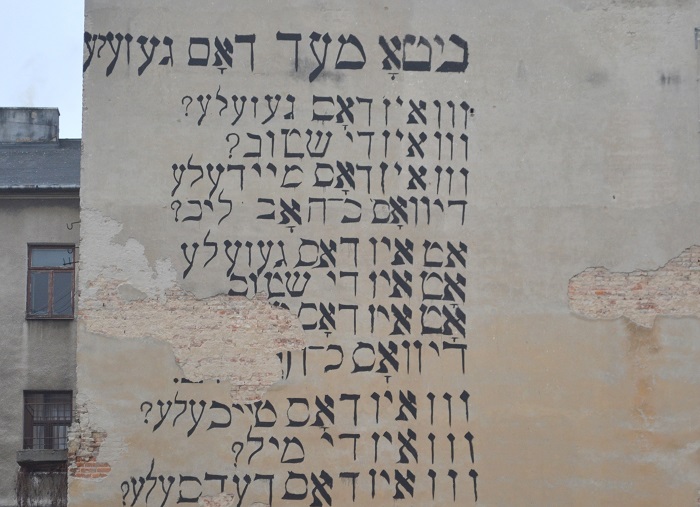 18. Inspired by the Carnaval Sztukmistrzów colourful painting near the Astoria building, seen from Lipowa street, was created by Cekas and Lump duo. 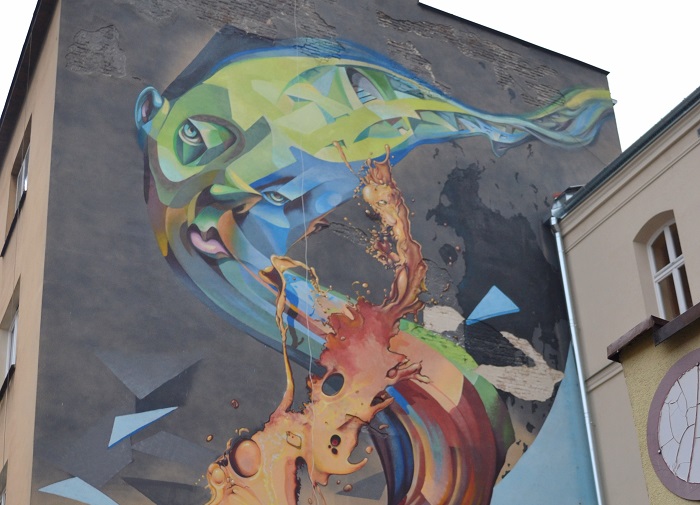 19. The mural at the outer wall of the gym hall of the Maria Skłodowska-Curie Highschool number V at Lipowa 7 street, was created thanks to the school's students' contest win. 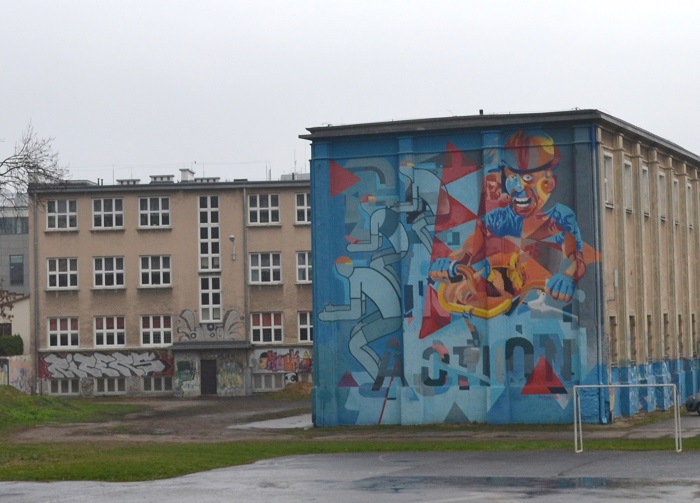 20. At Narutowicza 59 street we can see a painting by Tone, a mural artist from Poznań. The mural relates to the East of Culture – Different Sounds festival and presents a blind fugure listening to the sound of clocks. 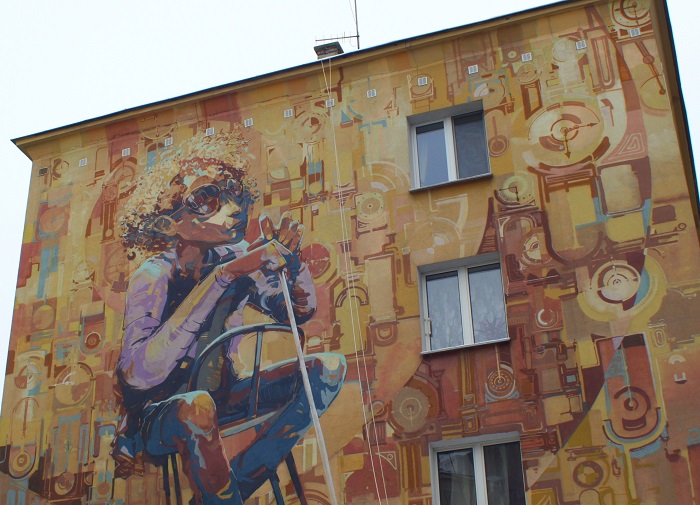 21. At Zamojska 47 street there's a mural "Entry of the general Zajaczek to Lublin". It was created on the occassion of the Great Jubilee of 700 years of Lublin. It shows the view on the southern part of the city from the beginning of XIX century. It was inspired by a painting by Philip Dombeck, currently hanging in the office of the Mayor of Lublin. 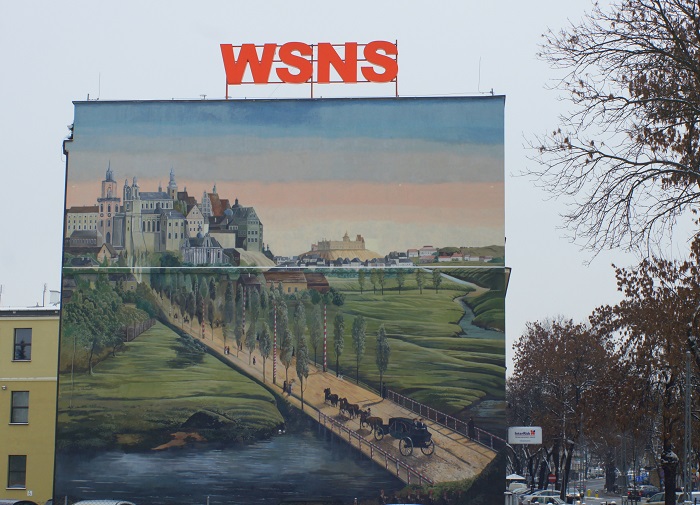 22. At Obrońców Pokoju street nr 2, on the side of the building which is the seat of Polish Radio Lublin, you can admire a mural that was created on the occasion of the radio's 70th anniversary. The design of was created by the respected artist Dawid Ryski, and the implementation was carried out by professionals from the Brain Damage Gallery. Work on the mural took less than four days. 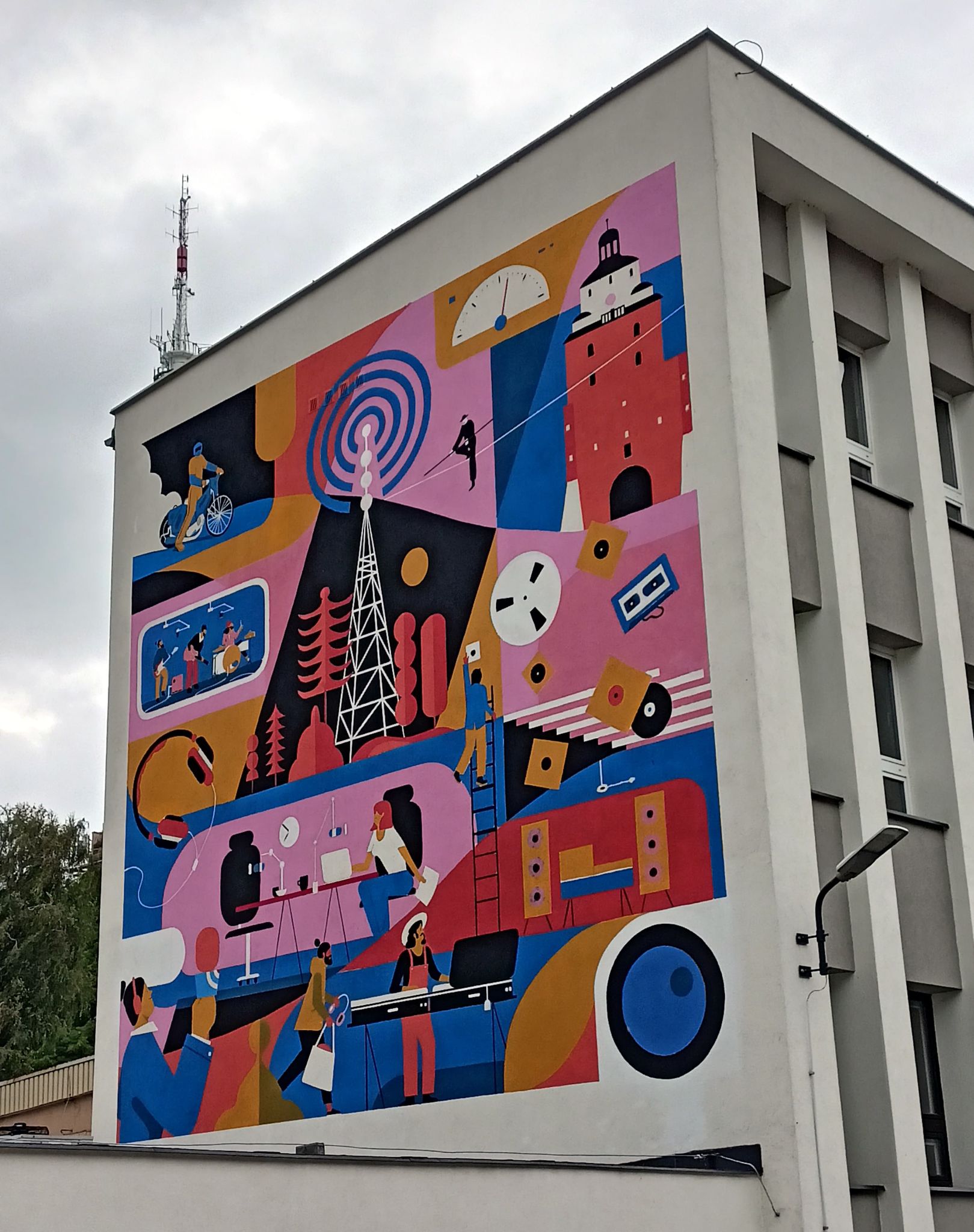 Photos of murals within the Lublin city centre:

These are just a few examples of Lublin street art. We encourage the long walks through the city and exploring the rest of it. Keep your eyes wide open - art often awaits in the least expected places. Art of Streets app available on Google Play may be useful while tracking down the murals of Lublin.