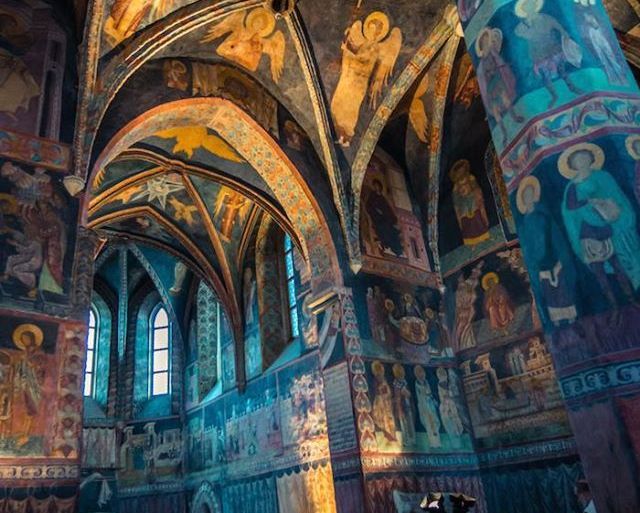 The Holy Trinity Chapel, located on the Castle Hill, is a unique example of combining Gothic architecture with Ruthenian-Byzantine frescoes. It is one of the most valuable monuments of medieval art in Poland and Europe.

The chapel was erected along with the castle by king Casimir the Great in the second half of the XIV century. At the beginning of the XV century, at the request of king Władysław Jagiełło, Ruthenian painters under the direction of master Andrzej covered the interior of the chapel with frescoes in the Ruthenian-Byzantine style. The works were completed in 1418.

The paintings were made using the so-called wet plaster technique, consisting of a mortar of lime and finely chopped fibers. In one day, only as much plaster as the painter could paint was applied. This method of painting was laborious but also extremely durable.

The composition of the paintings was created according to the principle of descending hierarchy. The Holy Trinity was placed on the vault above the presbytery. Slightly below you can see the seraphs, cherubs, and Eucharistic themes. The frescoes in the nave depict a group of prophets and the Gospel cycle. The whole is completed with scenes from the lives of Christ, Mary, and the saints. An interesting fact is that in the chapel you can see two of the three portraits of king Jagiełło painted during his lifetime that still exist. The captions encarved on the walls, two of which come from 1569, are also unusual. One of them, on the casing of the stairs leading to the choir, contains the Latin inscription "unia facta Est cum ducatus Lytwanie", which means "the union with Lithuania has been concluded".

The chapel is an example of a two-storey, single-pillar temple widespread in medieval Latin Europe. Both storeys have the same spatial arrangement. The upper storey has a square nave and a polygonal elongated chancel. The typically gothic stellar vault rests on a huge octagonal pillar. The chancel and the nave are separated by a rood arch.

The Holy Trinity Chapel was distinghushed with the European Heritage Label in 2007.