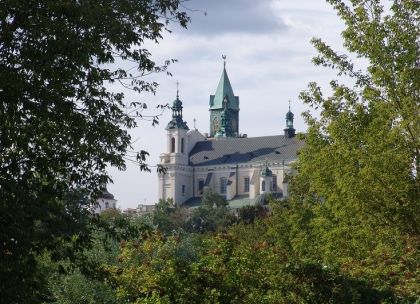 The magnificent Archcathedral is a must-see when visiting Lublin. It is a former Jesuit church, built in 1586-1604. The temple was built according to the design of Italian architects Jan Mario Bernardoni and Joseph Bricci, in the Baroque style. The church was modeled on the Roman Jesuit temple Il Gesu. In 1604 the church was consecrated by the Cracow bishop Bernard Maciejowski and received a call of St. John the Baptist and St. John the Evangelist. Along with the church, the Jesuits built a college which buildings once surrounded today's Cathedral Square. After a fire in 1752, the church was rebuilt. At that time, the famous illusionist polychromes by master Joseph Mayer were created.

In 1773 Pope Clement XIV decided on the dissolution of the Jesuit order. For a short time the church and the complex of Jesuit buildings were taken over the Trinitarian order. Then the Austrian partitioners turned the church into a grain warehouse. In 1805, when the diocese of Lublin was created, then a decision was made to renovate the church with a purpose of making it a cathedral. The main architect of the reconstruction was Antonio Corazzi. A classicist portico with six columns was added at that time, and the Trinitarian Tower was heightened. The cathedral was largely destroyed as a result of German air raids in September 1939.

In addition to the illusionist polychromes, there are other interesting things to admire in the temple, such as the baroque altar made of Lebanese pear wood, relics of St. John Paul II, and the Tribunal Cross in the Chapel of the Holy Sacrament, which once hung in the main hall of the Crown Tribunal. The image with the image of Our Lady of Częstochowa is surrounded with special reverence. On July 3, 1949, the gathered faithful noticed tears on Mary's face. For several days, thousands of believers from all over Poland came to the church to witness the "miracle of Lublin".

In the Archcathedral, one must also see the amazing Acoustic Vestry, where people standing on opposite corners can talk to each other in a whisper, and the columns painted on the vault seem to be moving. There's also see a unique treasury and crypts where Lublin bishops are buried. An exhibition "Cult - history - legends. Lublin Archcathedral - the heir of the monuments and tradition" consisting of mementos from the non-exisitng church of St Michael the Archangel, among others, is located at the choir.

The cathedral can be visited every day outside the services.